The Wonder of Metamorphosis – Molting Cicada 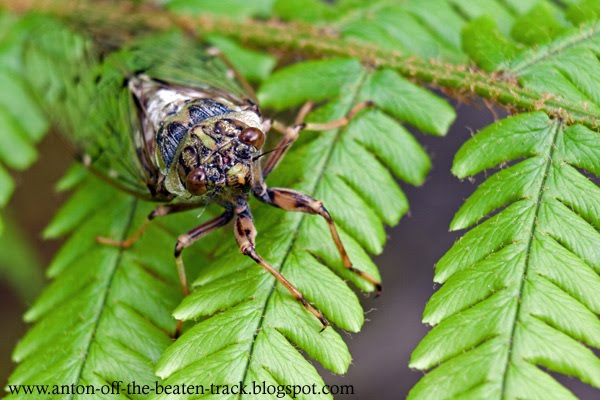 Japanese Cicada – Ezo Haru-Zemi
Sometimes in life during some extremely lucky or by chance occasions we can see things that really do stretch the imagination. For me those things are what make life all the more worth living, these special events could be something so simple, such as a fresh spring flower coming into bloom after a period of winter dormancy, fresh green leaves returning to leafless trees in the according season displaying in a riot of green hues a magnificent showcase of colour. When the mountainsides in this part of Japan (Togakushi) become covered in a canopy of colour during spring the Japanese say “the mountain is smiling” and who could argue, it certainly seems like the mountain is happy about something the way it clothes itself in such fanciful colours.
But aside from that lets get back to this moment of ‘witnessing creation’ as it were in the form of a Molting Cicada undergoing Metamorphosis. 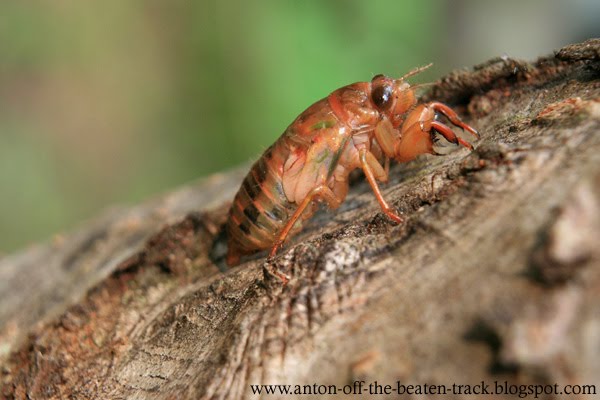 The Cidada Nymph
What has really made me marvel at the wonder of life is being lucky enough to observe the metamorphosis of a Molting Cicada, a truly life changing experience (for the Cicada). At this time of year there are many venturing forth into the big wide world and leaving behind their subterranean stage of life. I managed to create some Timelapse Photography by taking a couple of hundred shots over an hour capturing the Cicada nymph instar clinging to the bark of a tree as it molted. (See Video Below) I got as far as the reclined stage when failing light prevented me from going any further. They come out just before sunset and the whole transformation of the Molting Cicada takes about 4 hours. Once the creature has almost shed its skin there is a period of stasis whilst the wings form which eventually give the strength for the final push out of the old shell. 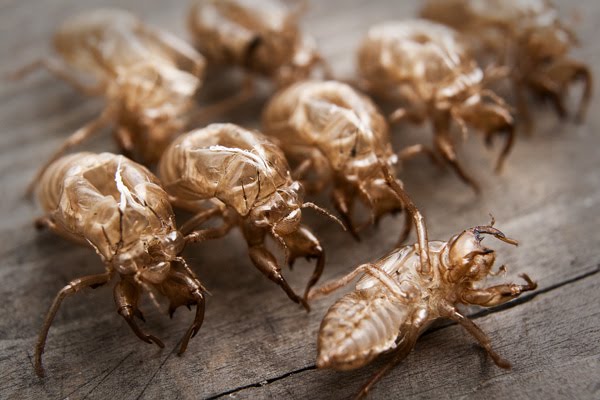 Old Cicada Husks Shed After A Molt
There are roughly 2,500 species of Cicada around the world living in temperate to tropical climates. Ever wondered what that high pitched clicking is in tropical climes? Well that’s the Cicada song. And they’re a noisy bunch when they get going but I guess they would be as that’s their mating call and they only have a couple of weeks to mate before they pass over to the other side after anything from 5 to 17 years living underground! The Cicada that has the 17 year lifecycle is the North American Magicicada. 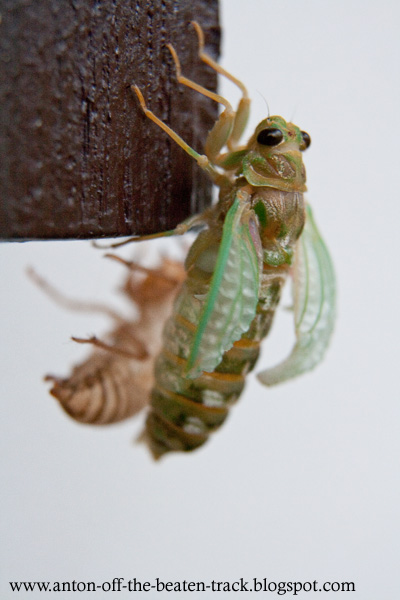 Almost Airborne
Before the Cicada Molting stage Cicada’s survive underground for the most part of their lives at depths ranging from 1 to 8 ft where in the subterranean supermarket they feed on plant or tree root juice. When they finally break free of their subterranean shackles, surface and molt (shed their skin) they have but limited time to survive. Once they have the strength in their wings they have to find a suitable tree and nestle amongst the safety of the canopy cover avoiding the preying eyes of birds and start their mating call. Squirrels are also prone to prey on Cicadas so to are the clever Woodpeckers we have around the forest here. At sunset they go from tree to tree checking each one quite thoroughly for the young fresh meaty Cicada that has already molted. 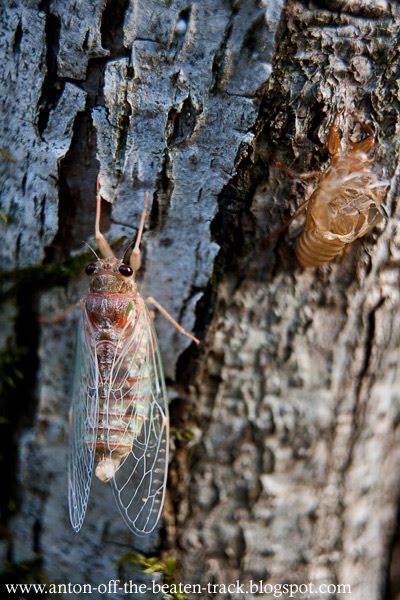 Cicada with old shell
Now the Cicada mating call is quite a sound and its hardly surprising that their is a sense of urgency to it, after all they only have a week or two to mate before they die hence those frantic calls are an elaborate ploy to attract the opposite sex. After mating the female lays her eggs within the bark of a tree or on a branch after which they will hatch and the newborn will return to the earth, burrowing back underground where again it will spend the majority of its life.
And finally the Timelapse Video.
Molting Cicada Timelapse Video
Apologies for not capturing the wing growth and the final push out of the old skin due to failing light as it takes another couple of hours for that to occur, so I’ve put a final shot at the end of the video of a Cicada late at night when the whole process was complete and he or she had obviously avoided the hungry eyes of the resident Woodpecker and the Fox! The image below is another Cicada, different night different substrate. They don’t venture too far up a tree trunk or plant before starting their molting process in this neck of the woods. Anything from 1 to 3 ft seems high enough for them but not high enough to avoid the nasty Fox…… 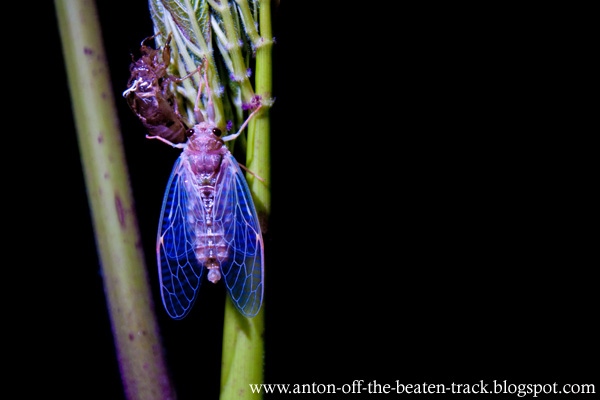 Cicada with old molted shell
This final image is the husks or molts of a different species which I suspect molts during the summer, quite a beast compared to the lovable little Cicadas we have around here. I’d estimate it would be twice the size of Ezo-Haru-Zemi. A monster!!!! 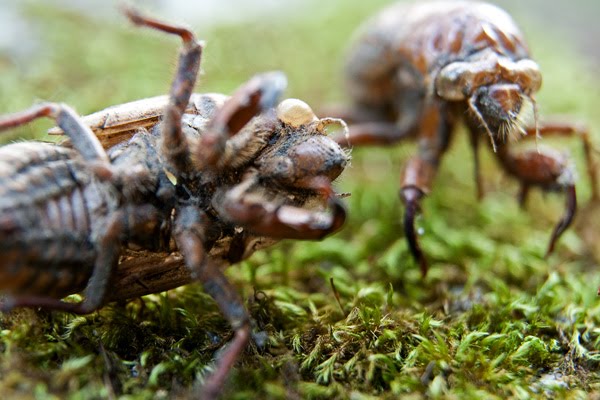