At the stunning Jumog Waterfalls in Central Java is located on the slopes of Gunung Lawu (Mount Lawu) a dormant volcano. It is around 43 km and just over an hours drive away from Solo (Surakarta).

I recently embarked on a journey there with a view to capturing a plethora of still shots to create a long exposure waterfall timelapse video after visiting previously and noticing the potential. If you want to visit the falls at a quiet time without the hustle and bustle of crowds you have to go in the week between Monday and Friday because during the weekend as with other Indonesian tourism sights Saturday and Sunday can get rather crowded with local visitors.

Jumog Falls is one of three rather majestic waterfalls in this area of Karanganyar Regency of Jawa Tengah all found on the slopes of Gunung Lawu (3,265 m) (10,712 ft) which in itself is an imposing compound stratovolcano which straddles the border of Central and East Java. No serious rumblings since 1885 but it has recently (at the time of writing) been in the news due to a raging fire on the trekking route to the summit between Pos 3 and Pos 4 which caused the deaths of 7 people. It has been a long and dry hot season in 2015 and the area can be a tinderbox waiting to be ignited by careless smokers who throw away unextinguished cigarettes or campers cooking food if not by natural conditions.

Cultivating rice paddy at the foot of Gunung Lawu

Jumog Waterfall is an impressive falls but much less visited than the extremely popular and more well known Grojogan Sewu Waterfall some distance away and located on the south flank of Gunung Lawu. Due to this popularity the prices for entry differ greatly when it comes to the foreign tourist.

Comparison of entry costs for the 3 waterfalls in the area

So enough of digressions and on to the whole point of this article. Timelapse Photography.

I would have originally preferred to shoot a standard video as it would have been less time consuming. It would have been much easier and quicker to shoot a 30 second video but I had in mind a Long Exposure Waterfall Timelapse Video. Now due to the limitations of shooting raw footage ie. maximum 24 fps (frames per second) I would have been restricted creatively and unable to obtain that silky smooth long exposure water effect that I wished for.

So a change of tact was necessary and I settled on shooting about 750 still shots over an hour period which I calculated would give me at 24 fps around a 30 second timelapse video after processing.

So I had to plan in advance when would be the best time to go to the location to capture the composition and contents of which I had pictured in my mind. I had to take into account the lighting, how busy it would be with moving subjects (visitors) aside from the actual waterfall itself, where I could practically and safely position the tripod for an hour without it being disturbed and decide on my settings.

Camera at the ready for the Waterfall Timelapse Video in Central Java, Indonesia

It’s always good to pre-plan these shoots as it makes the whole process of capturing what you have in your minds eye all the more easier and allows things to run a lot more smoothly although hiccups can and at time will occur but will be limited due to planning in advance.

This is a shot I took on an previous visit to the falls and was delighted with the sense of scale it portrays with the local Indonesian visitors taking the usual selfie photo’s, over shadowed by the towering Jumog Falls. Composed for the sense of scale and to show the waterfall in its natural surroundings with lush tropical greenery including the primitive and impressive tree ferns.

Sense of scale at Jumog Waterfall

So this is what became my idea for the time-lapse video of Jumog Falls and how to spice it up and make it a bit more interesting. Instead of just creating a standard video which would have no dream-like effect on the gushing water I wanted to see people rushing about in a manic fashion doing what tourists do at such wonderful natural sights with a stunning backdrop included.

The waterfall timelapse video actually consists of around 750 still images.

Using the wide angle Canon 17-35mm f/2.8 lens with a 77mm 3 stop ND8 Filter on a full frame body. Interval timer took care of the shots for an hour after I had programmed the settings manually in camera.

The settings were as follows :- 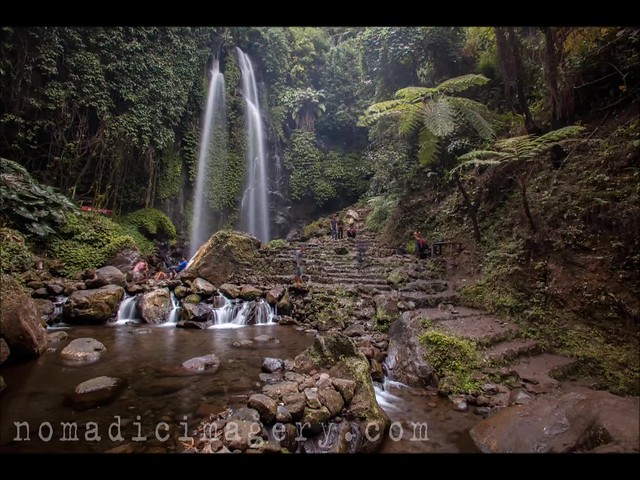 If you like this post or have anything to add please leave a comment, G+1 or Share and MANY THANKS for visiting. If you are interested in using any images for the web or any other means please be sure to contact me or visit the Homepage where you can find a wide variety of Images and Collections for Personal or Commercial use.
PLEASE BE AWARE All Images are my own and copyright protected, all rights reserved.
Follow Antony: